A half a century ago, people working in construction recognized that there was a shortage of college-educated managerial people familiar with the "nuts and bolts" of their industry. Often, newly-hired construction "managers" brought management theories to their new roles, yet little knowledge of how to apply those theories to real-world construction situations.

In the early 1970s, the Associated General Contractors of Minnesota decided it was time to rectify this situation. The AGC of MN's Board of Directors authorized establishment of a Higher Education Committee, which was asked to determine what should be done to fill the need for entry level managers whose training had been directed toward managmeent methods relevant to the construction industry. The committee appointed Carl Egan as its chairman.

After a few years, a cooperative effort evolved between the AGC of MN and what was then Mankato State University, which resulted in the implementation of the Construction Management program under the sponsorship of the College of Business's Industrial Technical Studies Program and the AGC of MN. Construction-related courses were added to the college curricula specifically for the Construction Management Program. AGC supported the Program by donating equipment and funds and by providing guest lecturers, construction-related films, slides and library materials. Students enrolled in the Program were required to gain practical knowledge through classroom study, field experiences and an internship.

The goal of the new Program was to professionalize the construction industry. It is believed to be the first Program of its kind in Minnesota. Classes began in 1974. In 1976, 21 students were enrolled in the Program and two graduated. By 1978, the Program had 74 students enrolled. 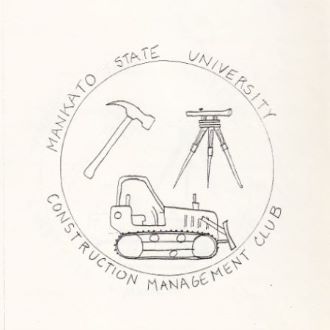 Fundraising events have always been critical to the success of the Club. In the early days, the Club annually organized an event it called the Knock-Down-Drag-Out Spaghetti and Wine Fiasco. Other types of events followed.

In 1979, members of the CM Club promoted the CM Program at a meeting of the Associated General Contractors of America being held in Minneapolis. Mark Ziegler and Dan Malecha spoke about the unique nature of the Program; alumnus Mark Houge recounted how the program trained him for a career at Rauenhorst Corp., which later became Opus. Also in 1979, the CM club was recognized by the AGC as an Outstanding Student Chapter for its district. 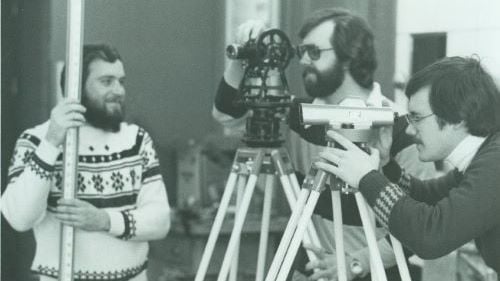 In the Spring of 1980, Joyce Robbins became the first woman to graduate from the CM Program. Also in 1980, nearly 130 students were enrolled in the Program.

The Construction Management Club took on the job of performing a space survey on the Memorial Library. The project included a physical inventory of every room of the building, a physical check of the exterior elevation, and an inventory of the roof.

In addition, student club members built lockers for the University's hockey team and got hands on remodeling experience at the home of the Program's director Carl Egan. 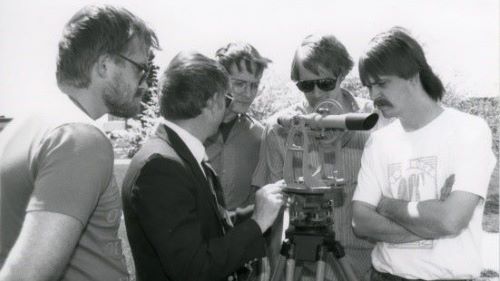 CM Advisory Board is founded

...and to the CM Program Director

Carl Egan, director of the CM Program since its inception, was named the recipient of the 1988 Award of Excellence by the Merit Shop Foundation, sponsored by the Associated Builders and Contractors Inc. The award recognized outstanding individuals who have served the objectives of the Foundation in a faithful, consistent and efficient manner.

Bringing contractors to campus in order to connect students and industry leaders has always been a defining facet of the CM Program. The CM Club worked on many such events, including the 1982 Contractor's Luncheon that brought adventurer Gerry Spiess to campus. Spiess gave a lecture and slide presentation on his trans-Atlantic and trans-Pacific journeys conducted in a 10-foot sailboat.

In 1988, the Grotto Foundation introduced a $1,000 scholarship for a Native American attending the Construction Mana 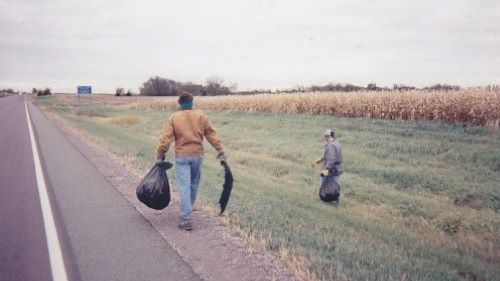 In the late 1980s, minutes from the CM Club reveal an organization still in its developmental stage. As the Program reached its tenth anniversary, Club members were focused on bringing in speakers, conducting more field trips, and focusing on new techniques and technologies. On the personal side, Club members admitted they needed to do a better job welcoming to new students and freshmen to their ranks.

Fast forward five years and the Club faced new challenges. Making the Club more welcoming to female students was one such challenge. So was recruiting participation among members to help organize activities. The Club adopted the use of a meeting agenda and Parliamentary procedure in order to professionalize its proceedings. 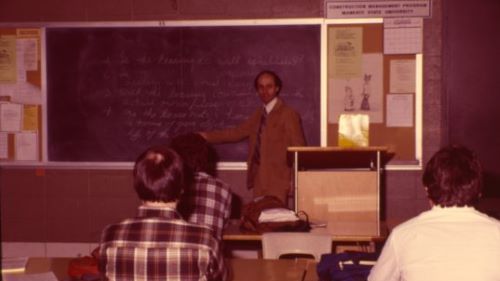 Carl Egan established relationships between the CM Program and three Universities in Moscow. The partnership resulted in the creation of the Russian-American Center for Construction Management.

In 1995, the Construction Management Program

With the move, Program Director Carl Egan said his ultimate goal was to create a new degree Program by merging Interior Design with Construction Management into its own department. The resulting baccalaureate degree would be called Interior Design and Construction Management and, according to Egan, would ensure stability for the Program and meet a marketplace need. "There is hardly a meeting I go to where I don't hear employers saying they want people with a knowledge of interior design," Egan said. 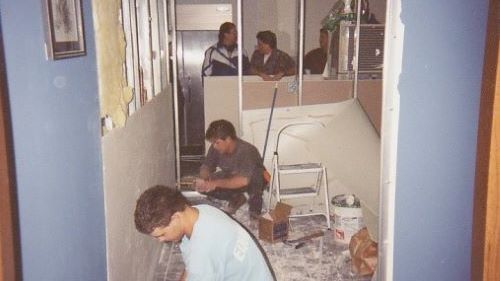 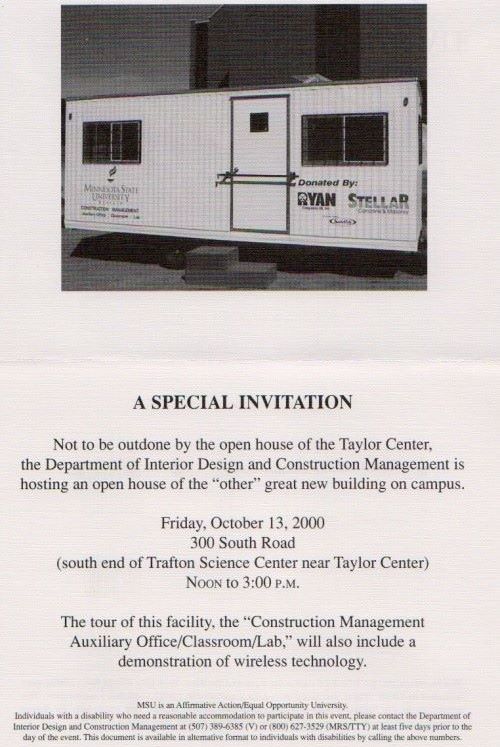 Ryan Companies and Stellar Concrete and Masonry team up to donate an 8-foot by 20-foot job-site trailer to serve as a classroom laboratory where students could observe construction operations, conduct productivity studies and learn resource management. Mike Cairl and Dan Stanley, both Program alums, spearheaded the donation.

Lundgren Bros., a Minnesota home builder based in Wayzata, donated $50,000 to the Interior Design and Construction Management Program. The funds were targeted toward the purchase of state-of-the-art surveying equipment.

In 2005, the baccalaureate major in Interior Design was suspended. Also eliminated was related programs focused on facilities management and historic restoration preservation. The official end to Interior Design was implemented as of spring semester 2008, in fairness to students enrolled in the program. With these changes in place, the Department also converted its degree program back to Construction Management.

In 2006, the PBS series Hometime brought its television crews to Mankato to film restoration work being conducted at the Betsy-Tacy homes, two literary landmarks. CM student crews provided off-camera labor for much of the restoration work featured on the program.

In 2008 and 2009, Dr. Scott Fee initiated Memorandums of Understanding between Minnesota State University, Mankato and South Africa's Eden Campus, a University he helped found, in order to open the door to service-learning for CM students. 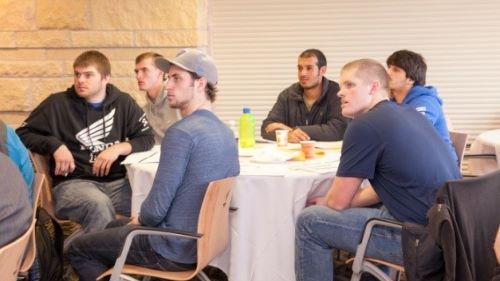 In 2011 under the steerage of Dr. Brian Wasserman, (department chair 2009-2018), the Construction Management program became fully accredited by the American Council for Construction Education. The Council is recognized across North America as the accrediting agency for baccalaureate and associate degree programs in construction management and other construction fields.

In an effort to mirror the collaborative nature of the building profession, Construction Management designed and built a collaborative classroom, which employs the most advanced interactive technology for estimating, scheduling and design. The classroom was funded by many companies that continually support the Program, with a lead donation given by Blattner Energy.

All of the individuals who graduate from the Construction Management program make a difference in their professions. Some have been recognized further, by being named Minnesota State University, Mankato Distinguished Alumni. These individuals, along with the year they were recognized, are: Sarah Eidet-Bishop (2005); Michael Cairl (2005); Dr. Carl Egan (2008); Alan Gerhardt (2009); and Alissa Warnemunde Schmidt (2013).