One year prior to completing his CM coursework at Minnesota State University, Mankato, Yusef Haddad stepped out of the classroom and into an internship with Ryan Companies. The timing was good, Haddad said. “The internship really helped me with my final year of school,” he said. Not only did on-the-job application of classroom lessons give Haddad insight into why his professors focus the way they do, it allowed him to deepen his understanding of construction theory during that final year. 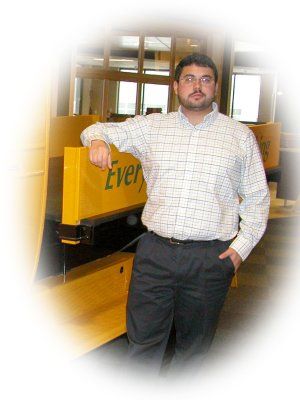 “I really understood why you need to know certain information and why you do the things that you do,” Haddad explained. Learning took on new meaning, Haddad said. No longer was he satisfied to learn just enough to pass each class; instead, he pushed himself to advance his comprehension of construction theory and he challenged his professors to go deeper in their explanations.

The downside of sandwiching his internship between his junior and senior years was that it forced him to work hard to maintain the relationships he’d developed at Ryan. “I would call people up once and awhile and ask how things were going…how this project or that project ended up,” he explained. He knew that keeping his name out front would be critical to finding a job — even returning to Ryan if such an opportunity presented itself.

Haddad described his internship experiences as comprehensive. “Ryan does a great job of getting you experience with owners, cities, subcontractors, scopes, estimates and schedules,” he said. “You really get a taste of everything.” As associate project manager intern, Haddad worked on the remodel of a Target distribution center. He helped write and then manage project scopes, develop estimates for the project, and participated in organizing, running, and documenting meetings with subcontractors and owners. He said his role ran the gamut of expected tasks, even including work with city permitting.

Haddad didn’t know much about Ryan — or any of the big general contractors — when examining possible internships. In fact, Haddad didn’t have background in construction prior to enrolling in the program at the start of his junior year. “I never worked in construction,” the Mankato native admitted. “But the hands-on part of construction interested me. I was always interested when I saw something being built; I would always walk up and look around and wonder why they would be putting rebar in or why they were doing this or that...” It is innate curiosity that often becomes the foundation for a growing career.

Upon graduation, Haddad moved to the Quad Cities, where his wife was finishing school. He signed on with a local company in Dubuque but kept an eye to the Ryan web site for openings. When a position opened, Haddad applied right away and was hired as a field engineer at a job site in Texas. Six months later, Haddad moved to a project manager role working out of Ryan’s corporate office in downtown Minneapolis. The work has him handling contracts, schedules and other paperwork. “I like talking to people, meeting people, working out issues that come up and finding a solution … and doing the office paperwork. If you don’t like office paperwork, don’t become a project manager. Be a site superintendent,” he advised. “But even they have to do some paperwork,” he laughed.

Haddad said the breadth of experiences he’s gained with Ryan has helped him find success in his young career – and made him a better manager. “There is theory we get in school and then when we get into the workplace we have to apply it. Do the details really work? When you are out there you can go look at the details and say ‘oh maybe if we put something here,’” Haddad explained. “When you can discuss it, you can understand it, and it becomes more tangible to you instead of just theory.”

Haddad believes success – on the job or in the classroom – hinges on a willingness to ask questions. “Nobody expect you to know everything after four or five years at school. The best project managers are the ones who are asking lots of questions so that they understand or so they can fill in the blanks on whatever they get their hands on.” If you can ask questions, he said, you can do this job.