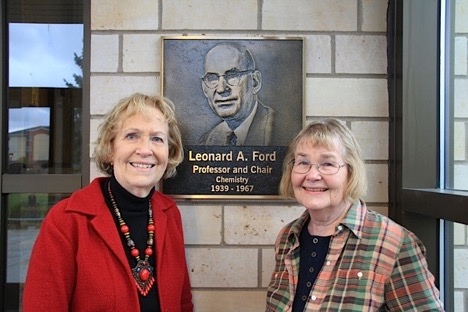 Daughters Barbara Ford Olson (left) and Joyce Anderson (right), in the entry way to the 67,000 square foot Ford Science Hall which is named after their father Dr. Leonard A. Ford.

The Ford Lectureship is made possible through the generous contributions of Barbara Olson and Joyce Anderson in honor of their father, Leonard A. Ford.

Ford Lectureship speakers have included a wide range of accomplished scientists from internationally recognized alumni to Nobel Laureates.  Two presentations are given during each event, one a more technical presentation given during earlier in the day and the second of more general interest presented that evening.