The purpose of this project was to increase production of polyethylene (PEX) tubing used to assist in securing fittings with two main features, a chamfer and a stop.

The team designed a machine to replace the client’s current equipment. The project was divided into two phases: Phase 1, production of a design that uses a modular approach to form features on the ring and Phase 2, create a testing apparatus that consistently created the stop and chamfer features on the tubing. This is used by Uponor to dial in the forming module component geometry, which, is then sent out to be manufactured. One student learned the advantage of group design and other team members ultimately said the key successes of this project were all group related: they all learned the importance of good communication with regular planning sessions and whiteboarding all of the designs, as well as how different team members with different backgrounds and expertise only make a project team stronger. The success of this project allowed Uponor to increase production of their PEX product and was quickly implemented on their assembly line.

Precision Gasket Company (PGC) is a manufacturer of gaskets, seals, and adhesives, for numerous industry applications. PGC asked the Twin Cities Engineering team to automate the process of separating excess material from the gaskets after gaskets have been punch-cut.

The team fabricated an apparatus that met this goal. The team agreed that the major take away was it is always important to make sure your project scope is realistic and to always consider time in the definition of the scope. Ultimately the team learned that sometimes you just need to buy the part you need to save time. While the team leader wanted to take a different approach than what his group wanted, he realized that his group members would learn much more by using different machines. At the end of the project everyone became experts at the created apparatus, showing how taking different design paths can lead to new forms of learning. The successful creation of an automated process allowed for a streamlining of the gasket and excess material punching. This process lowered the amount of man hours required for production, while also providing an accurate system.

The client was looking to automate this process which would free up valuable man hours and increase measurement accuracy.

The team was tasked to design, build, and validate a test stand which would make this measurement process autonomous. The client provided the team with two test stands, one purchased and one reversed engineered, which were cannibalized to produce the team’s test stand. A series of motors and measurement devices were used to accurately produce a graph of rotation versus torque. Measurements were made on the output side of the gearhead with a torque transducer used to measure the torque generated by the motor. The rotational angle of the motor producing the torque is measured through an encoder internal to the motor. The second motor used in the measurement process holds the input side of the gearhead fixed. Given the perfect match of personalities that created an awesome dynamic, the team called itself The Dream Team. A blend of juniors and seniors, everyone worked hard and spread the load evenly. They were the first ones to get to Twin Cities Engineering in the morning and the last ones to leave at night. One student said the true turning point for this project was when the client drove from New Ulm up to TCE to see what The Dream Team had so far, and they saw how seriously the team took this project. The client saw the team as undergraduate engineers and not just students. 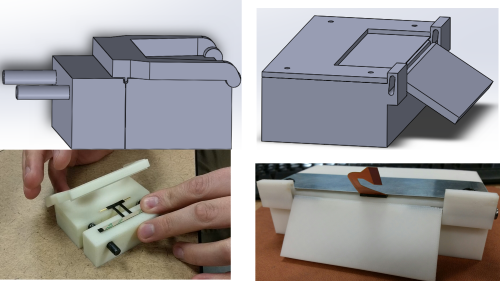 All Flex is a company that specializes in creating flexible circuitry as well as flexible heaters. The design team at Twin Cities Engineering was tasked with decreasing the manual labor cost of manufacturing for All Flex by 20% through use of jigs, fixtures, and lean manufacturing methodologies.

These manufacturing improvements were implemented on a minimum of 10 reoccurring parts numbers. The 20% labor reduction helps ease the burden of labor on the assembly floor, as well as increases production of recurring orders and lowers manufacturing overhead costs. Due to the nature of the project being focused on the manufacturing process for specific part numbers, much of the design and prototyping for this project took place at the All Flex Bloomington facility. One student found it exciting to work on something he had never heard of before, and working outside his comfort zone allowed him to grow in his engineering technical knowledge. Another student said that the feeling of success came from saving All Flex $100,000 in the first year of production use.